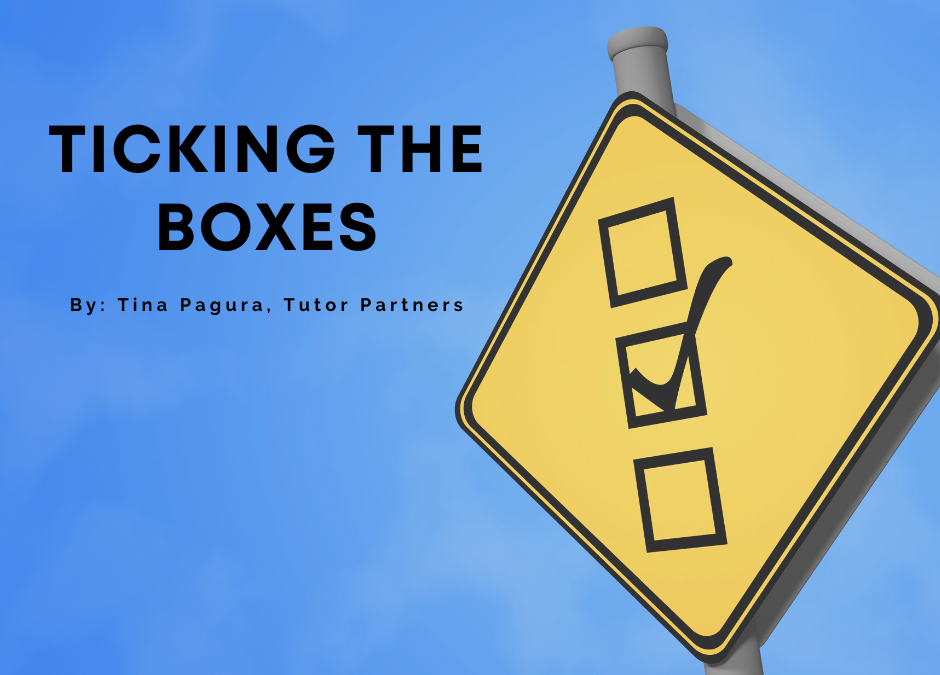 At what point is ‘ticking the boxes’ considered to be more valuable than life itself?

Let’s think about it for a minute – there’s always been significant societal pressure to meet certain standards by point X, and worse yet, the labels of this disorder, that disability or something other than the norm, often do more damage than good.

We’re not suggesting to ignore the reality of situations or necessary supports and accommodations, we mean, it’s simply a fine line that we cross, when these boxes and their subsequent labels are affixed. Be it positive or negative, they weave throughout every aspect of one’s life. Bottom line, every element is stereotype and concept is a societal construct, of how things are perceived to be.

Why is ticking them, forever so vital? It’s a controversial subject.

Quite frankly, it’s harmful and often dismissed with too much perception of victimhood attached. And hey, we need to be clear here, because this isn’t about being ‘victims’ or even worse, for pity sake.

No, we need to get serious about this. Now is the time to start talking and read on. The uncomfortable notions associated with the boxes, and the ramifications of what they do are not going to evaporate. Nor is it something to be ignored. There’s something to be said for the old cliché “Ignorance is Bliss.”

We don’t always see the news reports of near deaths, or clocked suicides for not ticking whatever box someone was supposed to fit.  And even if we do register the count for a second, those numbers are soon lost in amongst the reports of other matters or as the next famous person hits the designer market.

Ironically, that’s the common thread though, isn’t it? Especially during adolescence, where ‘fitting in’ is so vital – and the words, ‘you had better not fail, you want to be successful’ echo in the chamber of silence.

When you feel like your kid is failing or not quite meeting the bar as you or the system envisioned is difficult. Unfortunately, this notion is inadvertently projected on our children simply because we think how on earth are they going to survive in the world if they fail? It’s hard not to feel such pressure.

The truth is, as much as it isn’t favorable, failure isn’t the end of the world, they really will learn from it.

That’s not to say we want our kids to fail. No. – We’re far from lowering the bar here. At Tutor Partners we strongly believe success will still be achieved one way or another.

Are the expectations we have of our children a projection?

When we’re focusing so much on what’s expected from us in life, we never truly have the desire to pursue what we want. In the end, this really doesn’t work in favor of anyone, does it?

That’s not to say we shouldn’t have high goals and aspirations for our children, quite the opposite in fact.  Let’s just be conscious of the fact, things will work out more so, if we acknowledge we don’t share the same life as anyone else.

It’s easy to say: “Who cares what other people think?  But the truth is, it’s important to remember words and actions have an impact upon us, no matter how much we ignore them.

So, instead of getting stuck in comparison mode, reflect on why that comparison is there.

Meeting the bar can still be met, there are a myriad of ways of doing so and sometimes it may be achieved later than we expected, but it happens regardless. Changing one’s motivation is intrinsic and nothing can be done to force this desire. Thus, attempts to impose this behavior are likely to backfire.

In Australia, we say ‘no worries’, even if there are. Set success as a goal but having unrealistic goals for everything isn’t the solution.

Are ticking boxes X, Y and Z in completing those extra AP Classes a fundamental necessity when there is already overload?

Are all those boxes useful? Or is it just to look good on paper?

“Almost everything: all external expectations, all pride, all fear of embarrassment or failure. These things fall away in the face of death, leaving only what is truly important. Remembering that you are going to die is the best way I know to avoid the trap of thinking you have something to lose.

Ticking certain boxes for success should feel encouraging, rather than an obligation. Often we’ll create the opposite effect.

In time, perhaps it’s all the boxes that need a-changin’.

Join forces with Tutor Partners today. Let’s support those we love to run freely, walk wobbly, roll hard, do good, don’t litter any which way they must to achieve their own successes. Oh, what an amazing world it would become!